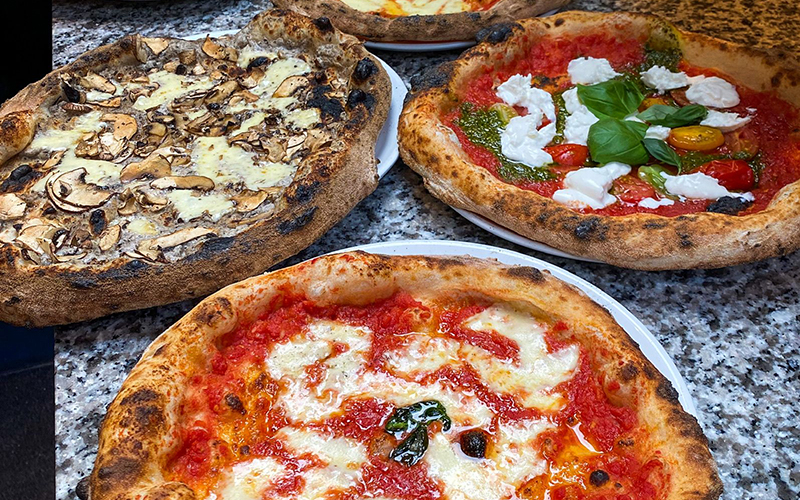 London’s Pizza Pilgrims have landed in Brighton, bringing their buzzy restaurant to a three-storey site on Ship Street.

Their trademark Neapolitan pizza (it’s softer and airier than its Roman counterpart, and delicious for it) is made from the highest-quality ingredients they can get their hands on. You can choose staples like Margherita and N’duja, or try some of their own spins on classics – the Double Pepperoni and Spicy Honey, the Smokey Aubergine Parm and the 8-Cheese (eight!), to name a few.

Vegans are also well catered for, with three plant-based pizzas on the extensive menu, plus there’ll also be a monthly guest special for diners to sink their teeth into.

Excitingly, and unusually for a pizzeria – or any restaurant, really – there’s a three-a-side indoor football pitch in the basement, table football and a big-screen Fifa station while the two top floors are dedicated to their tasty food and drink.

Pizza Pilgrims may have started in London, but co-founder Thom Elliott lives in Brighton and, happily, they’ve brought a lot of the city into the restaurant. They’re serving ice-cream from Boho Gelato, tables were built from reclaimed pallets from The Wood Store and the walls feature works from local artists Minty, Dave Pop and Skatin Chinchilla.

“The building we’ve found on Ship Street is really a beautiful one – and has given us the opportunity to flex our muscles a bit on some fun bits and bobs whilst also sticking to our focus of making great, authentic Neapolitan pizza in a buzzy, vibey environment,” said Thom.

“We’re so pleased to have had such a warm welcome from the community, too – and have worked with so many amazing charities, artists and tradespeople from Brighton already. Here’s to much more of that,” he added.

We’ll have a pizz-a that!