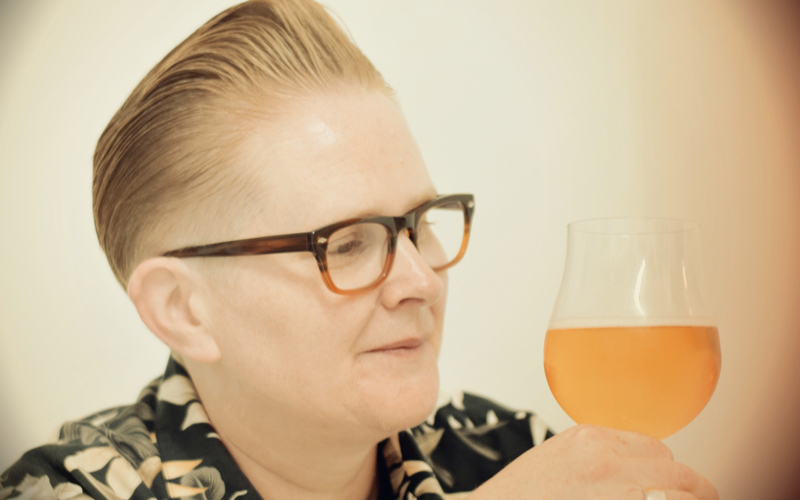 Beer enthusiast Emma Inch knows her pints from her Prosecco, so we were excited to find out she’s the beer-drinking force behind Brighton & Hove’s very first beer week, which kicks off on Friday 24th August. She’s lived by the sea for 25 years and has been brewing beer for many more, so we spoke to her about her two true loves: beer and Brighton, covering everything from homebrewing to Hove.

Brighton & Hove’s first beer week kicks off this weekend, what made you decide to set it up?
This is Brighton & Hove’s very first Beer Week and will be the largest celebration of beer and brewing the city has ever seen. There are over 30 venues involved and, together, they are hosting more than 60 individual events across the 10 days. Brighton & Hove is a great city in which to drink beer and this is an opportunity to showcase the vibrant beer and brewing scene. Breweries within the city, across Sussex, and from further afield, have come together with the best beery venues in town to provide a programme of events which should appeal to everyone. There are tours, tastings, tap takeovers, music, food and, of course, lots of wonderful beer! This should really put Brighton & Hove on the map as a beer destination, both during the Beer Week, and throughout the rest of the year.

You host Fermentation Radio on Radio Reverb, how do you make beer interesting?
Fermentation Beer & Brewing Radio on Brighton’s Radio Reverb is a magazine-style show about the beer and brewing scene, both locally and nationally. The show includes interviews with brewers, features on beery events, homebrewing, beer and food matching, beer tasting and more. The beer and brewing scene is so exciting at the moment that there’s always plenty to talk about!

Beer is a drink that has been around for many thousands of years and forms a part of many cultures. Some even argue that the wish to cultivate plants in order to ferment and produce alcoholic drinks was part of the reason humans moved from hunter-gathering to living in more settled communities. There are hundreds of styles of beer, ranging from sour Lambic to robust stout, and lots of stories to tell about the history of beer and the contemporary scene. Why not tune in on 97.2FM every fourth Sunday of the month to find out more or catch up on iTunes or Spotify? How long have you been homebrewing and what would your top tips be for anyone starting out?
I started homebrewing many years ago as a student and made some pretty appalling beer! After a break of a few years, I began again about five years ago and found that the range and availability of ingredients, equipment and advice had improved so much that it’s now relatively easy for anyone to make really good beer at home. [Music to our BOTI ears!] One of the good things about homebrewing is that you can experiment with flavours in a way that might be difficult for many commercial breweries to do. If you want to make a chocolate peanut butter stout or a pineapple gose, you can! You can even grow hops in your own garden and use them in your brews. Like cooking, it’s about getting involved with your ingredients and being as creative as you can.

The advice I would give to anyone thinking of starting up is – go for it! All-grain brewing may look complicated at first but there is plenty of advice and information out there. Read lots, watch online videos, and join a homebrew group – Homebrew Brighton meets once a month and is very friendly. I would also recommend people enter homebrew competitions – it’s a great way of getting feedback. But mainly, don’t be afraid to make mistakes – it’s definitely the best way to learn.

Which beers are you most looking forward to trying during beer week?
There are some wonderful beers that are being launched during, or have been specially brewed for, Brighton & Hove Beer Week. Brighton Bier are launching their Mabiera Pale (a beer brewed in support of the ‘Save Madeira Terrace’ campaign) on cask for the first time; Franklins are launching their Redcurrant Sour; North Laine Brewhouse has created three collaboration brews alongside Dark Star, UnBarred and Kiln breweries; and I’m particularly looking forward to trying a collaboration between UnBarred Brewery and Pharmacie Coffee – Redeye Sour.

Which event is a must during beer week?
It’s impossible to pick just one! There are food and beer pairings, music events, storming tap takeovers and much, much more! I’m particularly looking forward to a sky-high beer tasting in the i360, led by Harvey’s head brewer, Miles Jenner, and to exploring the Beers on the Pier festival on Brighton’s Palace Pier. The Burning Sky Fifth Birthday celebration at the Prince Albert is also an absolute must for beer fans. But I suggest you grab your diary, check out the website and start planning your week! And what should people drink if they don’t like beer?
They should drink beer! There are so many different styles of beer, and so many flavour combinations, I genuinely believe there is a beer out there for everyone. I think the best thing to do is to go to a good beer venue with a wide range of beer styles and well-informed staff (we have plenty of these in town) and explore. Many venues offer tasters or are happy to serve beer in smaller measures (e.g. thirds) so there is scope to taste a few. Beer is no longer a choice between yellow and fizzy or brown and flat – and Brighton & Hove Beer Week is a great time to see what else is on offer!

How about any recommendations for non-/ low-alcoholic local beers?
The no-/low-alcohol movement is growing rapidly and the beer world is rising to the challenge of producing great-tasting no-/low-alcohol beers. Some great new breweries doing this include Big Drop, Nirvana and Infinite Session. And, locally, Harvey’s produce low-alcohol versions of both their Sussex Best and Old Ale.

Wow, we need a beer now! We’d love to hear a bit about your non-beery side of life, too, so tell us where you live in Brighton/Hove and what you like about the area?
This year I celebrate 25 years of living in Brighton & Hove and, at various times, I’ve lived right across the city: Kemptown, Hanover, Hove, Western Road, North Laine, Queens Park…. At the moment, I live high on a hill with a view of the sea, and that suits me just fine.

When you’re not brewing or talking beer, what do you like doing in the city?
I enjoy walking my three-legged dog on the Downs, or mooching around North Laine shops. I also love rockabilly and vintage R&B so you’ll find me at the Brighton Rumble and other great rockabilly nights (sometimes even behind the decks…). And finally, what would be your perfect day in the city?
It would be a spring day – just before the craziness of summer! I’d have an early dog walk on the Downs, brunch with my family at Bison Beer, coffee on the seafront, a film at the Duke of York’s and something lovely to eat at Terre a Terre.

You can listen to Emma’s Fermentation Beer & Brewing Radio Show on Brighton’s Radio Reverb on 97.2FM every fourth Sunday of the month to find out more or catch up on iTunes or Spotify. Brighton & Hove Beer Week is running from Friday 24th August to Sunday 2nd September, with hundreds of events across venues in the city, so we’d recommend getting out there and discovering Brighton beer.
brightonandhovebeerweek.com